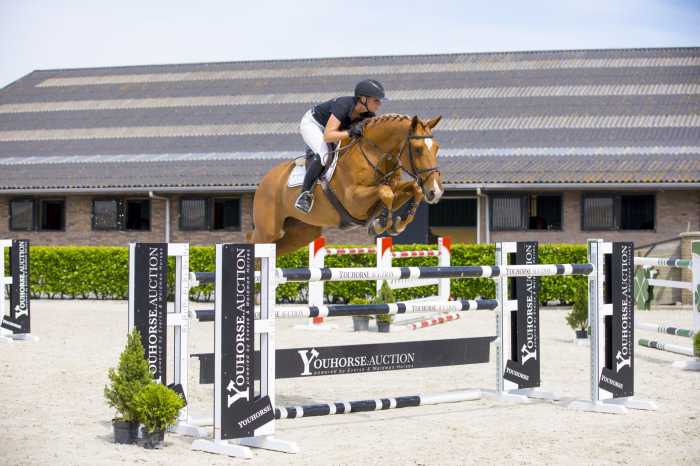 The 25th Youhorse.auction on Tuesday 2 August could count on three trend-setters. The 7-yr-old KWPN product Kane (Douglas x Ustinov) received the highest bid, 65,000 euro, and will leave for the USA. Also Complete Z (Chacco Blue x Big Star), the most expensive filly for 40,000 euro, will cross the ocean. Steven XH (Baloubet du Rouet x Vigo d’Arsouilles) was the most expensive colt for 22,000 euro and he will move to the United Kingdom.

Auction topper
“When I saw Kane jump on the video day, I already began to suspect that he would be the auction topper”, says a very content Mario Everse about the auction topper. “So I mentioned this in the slogan on the website. It was nice to find that my feelings had been right. The buyers and the sellers were also extremely pleased. Now, that is great to see.” The new, female owner of Kane also bought the 4-yr-old Salomon van Horst (Jilbert van ’t Ruytershof x Kannan) for 24,000 euro, as well as a foal.

‘Fallen in love’
The highly interestingly bred filly Complete Z (Chacco Blue x Big Star), sold for 40,000 euro, was bred by Mario Everse himself.  “She is going to an American client of ours. They were staying with us and saw the filly in the flesh. And they immediately fell in love with her and were happy that she was for sale in the auction.”

USA front runner
With as many as 14 purchases The USA was again a front runner. Alan Waldman and Mario Everse already had many clients there, but via Youhorse.auction the network is constantly expanding.  “We have sold horses all over the world already, but this time also to Latvia. That is very remarkable. An online auction is so easily accessible. The horses are only one click away from you and you can make good comparisons and choices.”

In any case, there was plenty of interest in the 25th edition. “This was a real milestone for us. And exciting, too, because of the diverse offer of showjumping horses, foals, embryos and broodmares, and we are very pleased and hungry for more. It is always remarkable when a foal sometimes goes for more money than a 7-yr-old that can already jump big fences. People like to buy ‘hope’. Several people scored real bargains. Over all, the prices were realistic.’’

September auction
Waldman and Everse want to present a varied collection again on the next auction running from 3 to 6 September. “Because there was a lot of enthusiasm for foals and broodmares. We have already been offered several good jumpers and foals from highly reputable breeders. We have even been asked to auction some dressage horses. It is going to be very interesting again.”

The selection- and video-days will be held on 22 to 24 August at Stal Everse in Waddinxveen. “Again with showjumping horses, hunters, equitation and eventing horses, but also broodmares, foals and even dressage horses. There will be something for everyone.”